In 1988, Aerial Gilbert was blinded after using over-the-counter eye drops laced with lye. In that instant her entire life changed. Her career as a nurse—and, she thought, her days as an athlete—were over.

Six months later, a friend offered Aerial what she describes as "one of the greatest gifts I’ve ever been given." Aerial's friend invited her to row on the water again. In Aerial’s words, "muscle memory took over, and for the first time since the accident, this was the only thing I felt competent at doing. On the water, it was as though I could see again. There were no barriers or obstacles to moving freely."

Cherishing that freedom of movement, Aerial wanted to gain back the independence and active lifestyle she took for granted before losing her sight. In addition to rowing, she went through a training program to be partnered with a guide dog. It was one of the best decisions she’d made. "Rowing and using a guide dog have a lot in common. I move with independence and grace, and my guide dog and I work together as a team, just as I do with my rowing partner."

Since then, Aerial has represented the United States in the adaptive division of the World Rowing Championships and carried the Olympic torch in 2002. Today she is an accomplished athlete, has won medals in many competitions, and has been instrumental in championing the sport of rowing to people who are blind or vision-impaired.

Aerial currently works as the outreach manager for Guide Dogs for the Blind in San Rafael, California. Recently, she’s been combining her two passions: introducing indoor rowing and guide dogs to other blind athletes and active blind youths. Her passion is infectious! The response has been overwhelmingly positive.

For newcomers to the sport, rowing offers more than just exercise and a competitive outlet. By improving fitness, flexibility, and strength, it prepares them for a more active lifestyle all around. Aerial says that rowing is also especially good preparation for having a guide dog, which is another great option for people with visual impairment who want to be more active and independent. 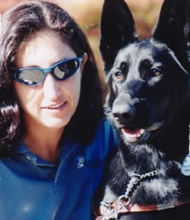