In 2001 Karyn Juntunen, a teacher in the Community Transition Program in Houghton, Michigan, approached Terry Smythe, the founder of UCanRow2, about creating a fitness program to help her students, 18–26 year-olds with moderate cognitive impairments.

The students tended to lead very sedentary lifestyles, and Karyn wanted Terry’s help in reversing that trend. Although she was a lifelong rower, Terry at first thought that the rowing technique would be too complex and frustrating for the students to learn. It wasn’t until one of the students asked to try the machine, and she saw his enthusiasm and success, that she realized her mistake…the students loved rowing!

Karyn and Terry quickly began to focus on rowing for many of the students. Terry gave the students target distances and stroke rates, and would play music to help them with rhythm and cadence. They enjoyed it so much, especially workouts in the 1000m to 4000m range, that Terry now has them participating as a team in the World Erg Challenge every April.

The program is still going strong, and for Karyn it’s demonstrated that rowing’s effectiveness, versatility, and fun can benefit everyone, regardless of ability: "The rowing machines provide a low impact exercise that is easy to learn along with being an excellent workout. The World Erg Challenge has become greatly anticipated. The students in the rowing section are very competitive and enjoy the camaraderie with Terry at the helm. They are so excited about the number of meters that they are rowing that it is the first thing they tell me after each workout. Between the music, the laughing and the water breaks...is this really exercise that should only be available to a select population? My students would have never been a part of the rowing community until we met Terry. The rest is history."

Similarly for Terry, she’s happy she was wrong in her original assessment: "I would encourage other facilities with indoor rowers to explore the opportunities with this population. It is truly a fun and rewarding experience. If enough of us in the fitness industry offer the opportunity for them to learn and improve on the indoor rower anything is possible. Shouldn’t everyone have the option to realize the power of the erg?" 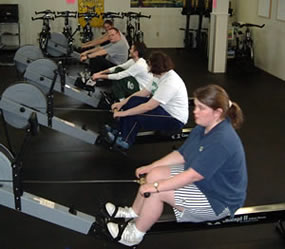